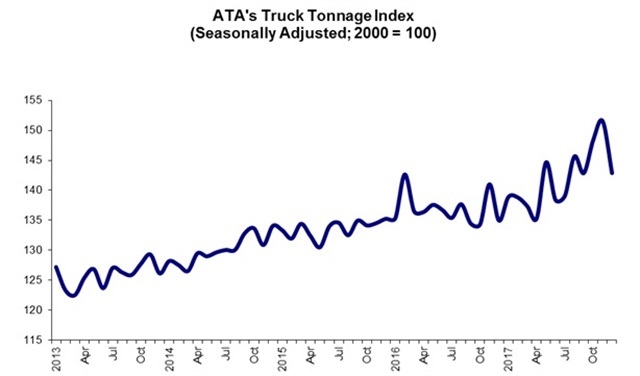 Compared with December 2016, the SA index increased 5.9 percent, which was down from November’s 7.5 percent year-over-year gain, but still “very strong,’’ according to ATA. In October, the index surged 10.5 percent on a year-over-year basis.

ATA also revised its November monthly increase in the index down to a 2.1 percent gain from the previously reported 2.3 percent increase.

The not-seasonally-adjusted index, which represents the change in tonnage actually hauled by fleets before any seasonal adjustment, equaled 141.9 in December, which was 3.4 percent below the previous month’s 146.9.

“Despite the decline in December, last year was a solid year for truck tonnage, especially during the second half of 2017,” said ATA Chief Economist Bob Costello. “I remain optimistic for 2018 for a host of reasons, including a pickup in factory activity, better housing construction, solid retail sales, and an expected shot in the arm from the new tax law.’’

“Trucking serves as a barometer of the U.S. economy, representing 70.6 percent of tonnage carried by all modes of domestic freight transportation, including manufactured and retail goods,’’ according to ATA. Trucks hauled nearly 10.5 billion tons of freight in 2016. Motor carriers collected $676.2 billion, or 79.8 percent of total revenue earned by all transport modes.