The days of dispatchers spending much of their time attempting to track down drivers are history. Electronic logging devices (ELDs) and other modern technologies have turned today’s dispatchers more into data analysts.

Jim Hoss, vice president of Cash-Wa, a food distributor in Nebraska, said dispatch has totally changed from when he began his career 18 years ago. Back then, he could only dream of knowing where all of his trucks were at all times.

“We used to have to call customers to find out where our trucks were,” Hoss said. “Imagine doing that with 150 drivers. Our customers would be calling wondering when the delivery would be there. To be able to watch your trucks move around online is amazing.”

Tiffany Giekes, vice president of Decker Truck Line, agreed that while trucks still deliver goods the way they have for decades, dispatching has radically changed.

“It’s more like a trading floor. It’s not just one computer screen. It’s toggling back and forth between screens,” she said. “It used to be a roll of quarters and a fax machine. Now it’s the click of a button. We can kind of see into the future a little bit. We can plan. We can coordinate. We can coach our drivers to optimize their days. We have the tools now to make better decisions before they become big headaches.”

“We can see all of the available equipment that we have on the road and where they are,” Giekes said. “If we have a driver stuck in Des Moines and we need to get the load to Fort Dodge, we can send a driver empty and have them swap to make that delivery. You have the ability to put that puzzle together if you’re having an issue.”

The mandatory use of ELDs starting in December 2017 has helped erase some of the headaches dispatchers previously faced.

Jay Delaney, senior director of product management for TMW Systems, said that with his company’s software, “if a dispatcher tries to assign a driver a load that he can’t physically complete on time, the dispatcher is asked to consider a different driver.”

And the data suggests the best driver given a slew of variables, including deadhead miles.

“That used to be a significant black hole because you didn’t have your ELD on their truck,” said Andrew Roszko, senior vice president of Descartes System Group, a logistics management company.

“Now with everyone having ELDs, customers can view every truck on the road. Regardless if the shipment is on a truck from my fleet or on a third-party vehicle, I now have the same level of visibility. It has been clearly transformative.”

That has also been the case with route planning. Dustin Strickland, McLeod’s product manager, said that in the pre-ELD era, fleets would rely on the seasoned dispatchers who just knew about the best routes. Today, computers do such tactical work, allowing dispatchers to delve analytically into what went right and wrong in recent days and to better plan ahead.

“Only the very big boys had anything like that when I started in the business 21 years ago,” said Nate Fisher, terminal manager for Williams, a dedicated auto parts shipper. “Now our customers have 100-percent visibility with their freight at all times. They see where their truck is and how long it’s going to take to get there. Five years ago, we were still manually entering the information on our customers’ websites.

“Our dispatchers would always be taking arrival calls from our drivers and wait for the departure calls,” he continued. “Now the trucks auto-arrive and auto-deliver.  It’s like jumping from 1970s technology 50 years ahead at once.” 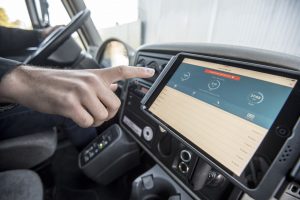 Jerry Robertson, who used lessons learned during his years at Oracle to co-found software provider Bolt System, said that the trucking industry struggled to accept his company’s introduction of cloud-based dispatch in 2004.

“People were skeptical,” he said of those times. “It’s hard to go from a legacy-type system where you buy a computer and you install and run the software to a cloud system.”

According to Robertson, cloud-based dispatch systems eliminate the need for fleets to have information technology personnel in-house or as contractors. These systems also automatically suggest additional shipments for drivers, based on available hours and proximity to high volume shipments within a predetermined workable radius.

Samsara is another cloud-based system that launched in 2015. One year later, Cash-Wa made the decision to use Samsara as its sole transportation management provider, after originally hiring the company because of its temperature-monitoring sensors.

“First thing in the morning when I come in and turn on my computer, I pull up Samsara to see where my trucks are,” Cash-Wa’s Hoss said. “It’s become so integral to our operations. It’s just how we do business.”

These newer software programs have eliminated the need for some dispatch jobs because of increased efficiency. Those employees who remain in dispatch are spending more time on route enhancement and customer service.

“Our dispatchers have to become more flexible and analytical,” Decker’s Giekes explained.

Some of that new flexibility is due to the rise of e-commerce, and the expectation of faster home deliveries.

“Customers now expect what was traditionally a two-day haul to be a one-day haul, which means that I have to have a team of drivers or a shuttle to meet that demand,” Giekes said. “The Amazon effect is forcing us to get more efficient. I look at it like a great opportunity for transportation companies to re-evaluate ourselves and how we service our customers.”