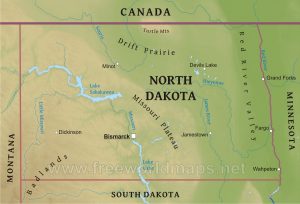 Drillers flare natural gas when it’s not economical to capture and bring it to market. Burning off the gas converts methane — a particularly potent greenhouse gas — into carbon dioxide, which also contributes to global warming but has less heat-trapping potential than methane.

Drillers in North Dakota and other regions in the current oil boom have found themselves awash in natural gas but constrained by bottlenecks to bring it to market.

The substance is produced with crude oil, but oil is generally more lucrative and has seen its prices hovering above the projected break-even point for U.S. shale operations. That means that with limited pipeline capacity, producers are committed to transporting oil and content to let natural gas burn off into the atmosphere.

In the booming Permian Basin in parts of West Texas and New Mexico, for example, shale drillers produced such quantities of oil — and had such limited pipeline capacity — that natural gas prices at times fell below zero.

With the number of U.S. drilling rigs up 16 percent at the end of 2018 compared to the same period last year, gas production in late 2018 and early 2019 was expected to jump by more than a third from 2017, according to the oil services firm Baker Hughes.

Oil and gas firms have invested heavily in pipelines and other infrastructure to help ease constraints that have effectively blocked natural gas in North Dakota, Texas and New Mexico from reaching other markets. Earlier this year, for example, the U.S. Energy Information Administration (EIA) reported that U.S. net natural gas exports in the first half of 2018 had more than doubled compared to the same period in 2017, a result of new and expanded terminals that liquefy natural gas for overseas export from the Gulf Coast.

Meanwhile in North Dakota, companies have invested $3.1 billion to expand infrastructure for capturing more natural gas, from “gathering pipelines’’ that carry the gas from wellheads to processing plants to expanding processing plant capacity to building a new pipeline to transport natural gas liquids.

“Gas capture is at the front of everyone’s mind, whether it’s the producer, the royalty owner or the state of North Dakota,’’ said Justin Kringstad, director of the North Dakota Pipeline Authority, which facilitates business development for pipeline projects. “It’s critically important as this play matures to have adequate gas capture infrastructure.’’

The downside is that most of the projects are not likely to be completed until the end of this year, and they are not expected to keep pace with the huge amounts of natural gas being produced alongside crude oil.

(from U.S. News and World Report)