The city of Kirkland, Wash., has been utilizing a new technology to help with flooding and backup-prevention: vacuum trucks.

The vehicles, called the Kenworth T880, are used to clear storm drain debris in the city. Equipped with Vactor 2100 series sewer and vacuum tanks, the trucks are able to unclog drains in and around Kirkland before flooding can occur. According to a press release, the vacuum system inside the vehicles can store 12 square yards’ worth of debris and up to 1,500 gallons of water. They can additionally pump out 80 gallons of water per minute at 2,500 pounds per square inch (PSI). 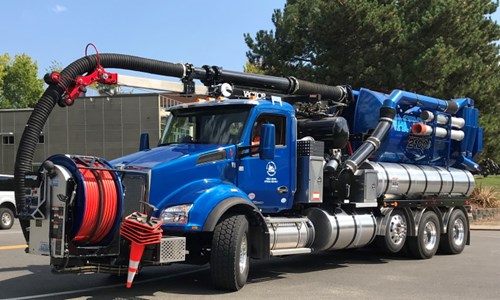 Kirkland started using the T880s around the city last year. In the release, the city’s fleet manager, Archie Ferguson, said that due to feedback from communities that had already been using the trucks, Kirkland was persuaded to purchase three vehicles.

“When spending taxpayer money, it’s especially important to purchase equipment that offers the best return on investment,” Ferguson said, adding that he and his city colleagues were “pleased that we are able to support a hometown company with this investment in equipment.”

The vehicle’s manufacturer, the Kenworth Co., is based in Kirkland and has been operating in the Pacific Northwest since 1912 after being founded by brothers George T. and Louis Gerlinger Jr.

Though Kirkland’s trucks mostly cover city limits — which constitute about 17 square miles — they sometimes move outward. If there is an emergency where the trucks can be of use in Redmond, for instance, the T880s will move outside of the set boundaries. 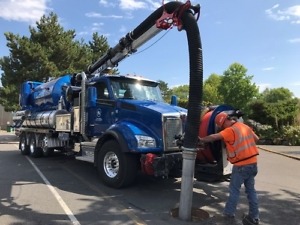 In the release, Ferguson described the use of the trucks as being “fairly routine work.”

“Our Kenworth T880s are out on the road every single day, clearing storm drains, assisting with digging projects and responding to emergencies,” he said. “Two T880s are designated to go around the city doing preventative maintenance by clearing storm drains throughout the year. The other Kenworth T880 is out cleaning sanitary sewers and assisting city utility projects that require ‘digging’ in hard-to-reach areas by shooting water and loosening up soil, so that it can be sucked into the tank. It’s especially helpful when we’re working near underground wires. This truck will also help clear storm drains in emergency situations, typically during periods of heavy rain.”

Ferguson noted in the release that as water quality progressively becomes a priority in the community, and as awareness of the trucks increases, spill response calls, in addition to general unclogging duties, have been occurring with more frequency.

He said that typically the trucks respond to accidents and cleanup work caused by water main breaks, pressure-washing and pollutant extraction.

Ferguson said in the release that the cost-effectiveness, paired with the local bent of Kenworth, is rewarding.

“We’re able to keep our T880s on the road doing their job, rather than accumulating costs,” he said. “It’s a bonus to operate equipment that we expect to provide years of reliable service, while at the same time, representing a company in our backyard.”