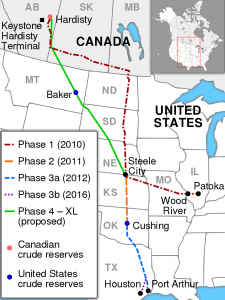 The Biden Administration has revoked a key permit for the proposed Keystone XL pipeline, the second time a Democratic administration has scuttled the $8 billion project in less than a decade.

President Biden’s action was part of a series of executive orders on his first day in office that included revoking “permits signed over the past four years that do not serve the U.S. national interest, including revoking the Presidential permit granted to the Keystone XL pipeline.”

The decision came despite pleas to Biden from multiple Canadian government officials to give them time to make their case for the 1,200-mile pipeline, which they argue has dramatically changed for the better, environmentally, since it was first proposed in 2008.

TC Energy, the pipeline’s developer, could decide to challenge Biden’s move in court or through the new North American trade deal, which the company did after President Barack Obama first scuttled the pipeline in 2015 over environmental concerns.

But the company appeared ready to give up on its years-long effort to build the pipeline, saying “as a result of the expected revocation of the Presidential Permit, advancement of the project will be suspended,’’ and it canceled plans to raise money to pay for the project.

In an email to staff on Wednesday Keystone XL chief Richard Prior said the permit denial would force the company to cut more than 1,000 positions.

“Over 1,000 positions will be eliminated in the coming weeks, the majority of these unionized workers representing the building trades,” he wrote.

The company has few legal options available, given that a presidential permit can be revoked for any reason, said Bowe and other corporate lawyers. At most, TC Energy or the government of Alberta, which invested in the project, could sue for monetary damages under provisions in the U.S.-Canada trade pact, analysts said.

Canada’s federal government would have to back Alberta in any lawsuit, and Prime Minister Justin Trudeau is unlikely to want to antagonize the Biden administration as the two countries set about improving the rocky relationship they had under Trump, Bowe said.

A group of Western state GOP senators plan to introduce legislation allowing construction on Keystone XL to continue. But since Republicans no longer control the Senate, the effort is all but symbolic.