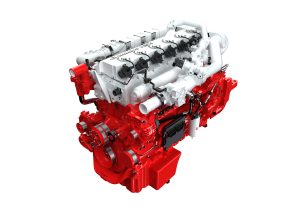 It was part of a display demonstrating Cummins’ Destination Zero strategy for key on-highway markets, which aims to reach net-zero emissions by 2050. In addition to the new X15H, Cummins showed off its X15N natural-gas engine; its new B6.7 Propane engine; its fuel-cell electric demonstrator truck; a terminal tractor featuring the PowerDrive 8000 battery-electric system; and a Cummins-powered Blue Bird battery- electric school bus.

Cummins announced the testing of hydrogen internal combustion technology in July of last year. Company officials said they have had impressive early results, already achieving production power and torque targets (more than 810-foot-pounds of torque and 290 horsepower from the medium-duty engine). Additional testing on more advanced prototypes will begin soon, the company said.

The engine will be a zero-carbon fueled solution for multiple markets. Cummins intends to produce hydrogen internal combustion engines in both the 15L and 6.7L displacements, believing that these engines enable the industry to reduce emissions in this decade.

“Our customers are responding favorably to this practical technology,’’ said Jim Nebergall, general manager of hydrogen engines. “These engines look like engines, they sound like engines, and fit where engines normally fit.’’ 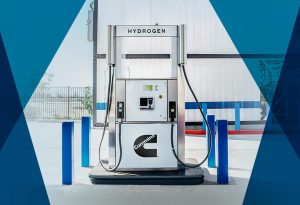 “Reducing well-to-wheels carbon emissions requires innovation of both energy sources and power solutions,” said Srikanth Padmanabhan, president of Cummins’ engine business. “While use cases for battery-electric and fuel-cell-electric powertrains are promising, the pairing of green hydrogen in the proven technology of internal combustion engines provides an important complement to future zero-emissions solutions.”

Hydrogen internal combustion engines can use zero-carbon fuel at a lower initial price than a fuel-cell or battery-electric vehicle with little modification to today’s vehicles, Cummins said.

However, that doesn’t mean Cummins is slowing down its hydrogen fuel-cell development. Cummins and Daimler Truck North America (DTNA) announced they are collaborating to upfit and validate Freightliner Cascadia trucks with a Cummins hydrogen fuel cell powertrain for use in North America. 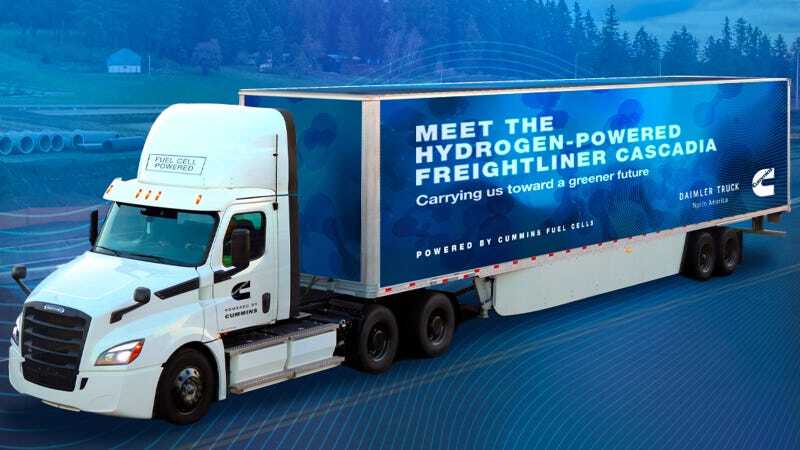 A Cummins demonstrator truck features a fuel-cell and battery-electric power system. The truck was designed with vocational applications in mind, such as regional haul, urban delivery, port drayage, and terminal container handling.

A Cummins demonstrator truck features a fuel-cell and battery-electric power system. The truck was designed with vocational applications in mind, such as regional haul, urban delivery, port drayage, and terminal container handling.

The demonstrator truck uses a fuel cell electric powertrain that replaces a conventional internal combustion engine. The electric motor is powered by high-voltage batteries and fuel cell engines. As the vehicle is driven, the system operates the Cummins dual HD90 Fuel Cell Engines to dynamically manage the charge of the high-voltage batteries as required by the power load demands of vehicle operation. The energy storage includes seven hydrogen fuel tanks with a total of 32 kg of compressed hydrogen gas at 350 bar, and it is equipped with seven high-voltage batteries, each with 53.4 kWh of capacity providing a range of about 200 miles.