It used to be that canola meal had to have a $100-per-ton discount to soybean meal before dairy nutritionist Marty Faldet would consider recommending it to his clients.

No more. Years of feeding experience are proving that canola is a viable alternative. About 70 percent of his clients, and most notably those with larger herds, are routinely relying on canola meal as their main protein source.

“Feed costs can be reduced and milk production can be maintained with canola,’’ says Faldet, who resides in Calmar, Iowa. 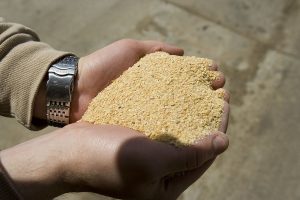 Faldet is part of GPS Dairy Consulting, and advises herds across the Midwest from Kansas to Michigan. Herds in Iowa have been the least receptive to canola, he says, but that’s only because soybean meal is so abundant and price competitive in Iowa. Elsewhere, farmers have readily accepted canola as their protein source of choice.

In early fall of this year, canola was pricing at $220 to $250 per ton, depending on farm location. And despite China’s tariffs on soybeans, soybean meal was still hovering around $300. The bigger challenge for canola was that brokers were only offering six-month contracts that were attractive versus a “clock’’ or 12-month contract that were not.

Working with feed dealers and brokers you trust is paramount to ensure a long-term and consistent supply, Faldet said. That’s because most of the canola that is grown in North America is produced – and crushed – in the western provinces of Canada. So it has to come to the Midwest either by rail or semi-truck, which can sometimes be disrupted by transportation challenges such as blizzards on the Canadian or northern U.S. prairies.

The thing is, Canada is poised to grow more canola in the coming years. In 2017, Canada produced 21 million metric tons of canola end products, said Brittany Dyck, with the Canola Council of Canada. By 2025, that production is expected to jump by some 25 percent to 26 million metric tons. 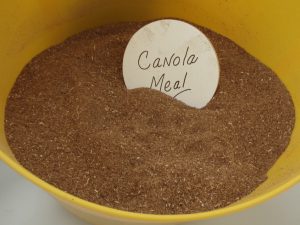 Canola can be especially effective in diets low in methionine.

“The RUP (rumen undegraded protein) in canola meal provides 40 percent more methionine than soybean meal, but it also has 10 percent less lysine,’’ said Essi Evans with Technical Advisory Service Inc. in Ontario, Canada. “If methionine is limiting, then canola might be a good choice, while perhaps not so if ingredients at hand are marginal in lysine.’’

The extra methionine, research and experience feeding canola offers are the reasons Faldet no longer requires a price spread of $100 between canola and soybean meal.

“I’ll go down to a $55 or $60 spread and still recommend using it if I’m balancing the diet for amino acids and methionine,’’ he said.

Use of a good nutrition modeling program is also necessary because the canola to soybean substitution rate is not one to one. Canola is lower in crude protein and energy, but has other nutritional attributes farmers and nutritionists can leverage. “You have to feed maybe 20 percent more canola, and that displaces other pounds of dry matter in the ration,” Faldet said. “So you have to re-arrange other diet components.”

In most of his herds, he’ll feed four diets: A fresh-cow diet (up to 14 days), a breeding group or high-cow diet, a pregnant or low-cow diet, and a first-lactation heifer group. Canola will be used in all four. But with the higher methionine levels in canola, he can back off some of the amino acid supplementation in the later lactation, pregnancy group.

In the end, replacing soybean meal with canola might save three cents to six cents per cow per day, experts said. Over hundreds or thousands of cows and a year of feeding, it does add up to some significant savings without sacrificing milk production, studies show.