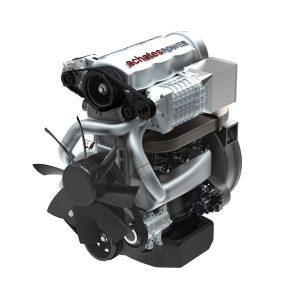 A pair of heavy duty, opposed-piston engines will be produced for an emissions-reduction project in California, officials with the program said last month.

The two 10.6L, 450-horsepower engines designed by Achates Power will run in Peterbilt tractors in regular service to prove the low-emissions performance that they’ve demonstrated in laboratory simulations, officials said. They will be operated within the state by the transportation arms of Tyson Foods and Walmart, and will be running by late 2019. 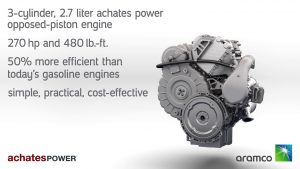 The 0.02 grams-per-brake, horsepower-hour Ultra-Low NOx standard target has been achieved in natural gas engines, but not yet in a production diesel engine, according to a company announcement.

The project team has started building the engines that will run in the Peterbilt demonstration vehicles.

Achates is a development company whose engineers have been working to perfect the opposed-piston, or OP, concept since 2004. It expects to license designs to existing engine manufacturers but will assemble the in-service test engines at its San Diego facility.

The demonstration project is funded by the California Air Resources Board (CARB) and several air-quality districts, and managed by CalStart, a Pasadena-based non-profit organization that encourages use of sustainable transportation methods.

The Achates OP engine also achieves superior fuel efficiency by virtue of its lower heat losses, improved combustion and reduced pumping losses, Johnson said. An OP engine has two pistons per cylinder, facing each other, and a central combustion chamber. Explosive fuel burn pushes the pistons apart and their connecting rods twist separate crankshafts at each end of the cylinder.

Through pulleys and gears, the crankshafts transfer their power to a single output shaft.

It is a two-stroke design with no intake or exhaust valves; fuel-air mix and exhaust enter and leave the combustion chamber through ports in the cylinders.

Peterbilt will integrate and deploy the new engine in two of its Model 579 Class 8 road tractors for the project. 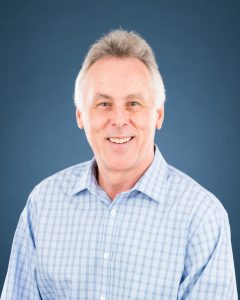 “This project challenges the conventional wisdom that ultra-low NOx cannot be combined with ultra-high efficiency in a diesel engine,” said Bill Van Amburg, CalStart’s executive vice president. “This impressive team is showing that you can significantly improve air quality while also making progress on climate change. We can and must do both.

“Success in this project will support widespread commercial adoption of the ultra-low NOx standard in Class 7 and 8 trucks, which will support CARB’s –  and the world’s –  air quality and environmental goals.’’

Johnson added: “Achates Power is committed to bringing the opposed-piston engine to market to provide a practical solution for ultra-clean, ultra-efficient and cost-effective transportation. Our project with CalStart for CARB shows the need in the market for solutions that will meet the goals we all desire, without forcing solutions on the industry.’’