Rich Hayworth has been driving big tractor-trailer trucks since 1979. 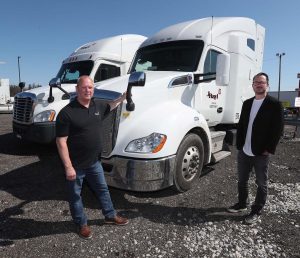 He now recruits and instructs new truck drivers, and makes the occasional over-the-road run for family-owned JRayl Transport in Akron, Ohio, a 400-truck business that operates primarily in the eastern half of the United States.

The long-established company and other trucking businesses continue to operate because they are considered essential during the COVID-19 pandemic, hauling such things as food, medicine and, yes, toilet paper.

Truck drivers such as Hayworth have had to make changes in what they do because of the coronavirus outbreak.

“I’ve been with JRayl for 25 years, mainly as an owner-operator and driver,” said Hayworth, 64, who is also a driver safety instructor.

“I’ve been delivering loads the last two and a half weeks,” he said. That’s included trips to Denver and to Delaware.

Based on regular talks with JRayl drivers and his recent experiences, trucking has changed in ways large and small, Hayworth said.

“What I’m seeing out here, you can’t eat at the truck stops anymore, so you have to get your food to go,” Hayworth said. “And a lot of them even have stuff shut down.”

He and other drivers have not had problems getting in and out of truck stops.

“The restrooms are actually much cleaner than they ever have been. And this is at all the major truck stops,” he said.

While the stops currently may not have a wide variety of food for drivers, they typically do have take-out items such as hot dogs, he said. Drivers now are prohibited from dispensing their own drinks at the food counters — truck stop employees have to provide them, he said.

Taking a Shower is a Process

Getting a shower at a stop now means having to wait, sometimes for a long period of time, because the showers need to be cleaned after being used, Hayworth said. As a short-term option to a shower, drivers are using hygienic wipes, he said.

Getting fuel is not an issue, he said.

Some shippers and receivers have done such things as bar truck drivers from using their restrooms while not providing options such as portable toilets; others have not instituted restroom bans, Hayworth said. In any case, truckers now have to assume that they will not be allowed restroom privileges at businesses and plan accordingly by going to a truck stop first, he said.

“That’s one thing some of our drivers are seeing,” he said. “And that is a big deal. That’s the hard fact.”

Shippers and receivers have also instituted more hands-free transactions with drivers, he said. Many people are now wearing gloves. Social distancing is the new trucking norm, he said.

“They’re keeping their distance and we’re keeping ours,” he said. JRayl is giving its drivers hand sanitizer and sanitizing wipes as well, he said.

One positive for truck drivers is that because there are fewer cars on the road now, that makes it easier to maneuver and make lane changes, he said. They also are no longer getting hung up in city traffic jams, he said.

“The communities are coming together like I’ve never seen it before,” he said. “They’re appreciative of truck drivers now.”

“I thought it was going to be a very strong year for shipping,” said Ryan Richards, JRayl’s chief operating officer..

February Was a Solid Month for Tonnage

The American Trucking Association reported that February was a solid month for trucking, based on its monthly index that measures hauling tonnage in the nation.

And then the coronavirus hit.

“Almost overnight we went from our best week of the year to our worst week of the year,” Richards said. “The week the governor shut down restaurants and whatnot … we were extremely busy and it fell off dramatically after that. It’s leveled out.”

We’re all dealing with something we’ve never seen before, he said.

“Hopefully the stimulus the government is doing will keep small businesses intact, if you will, until we get to the other side of this curve,” he said.

JRayl, a family-owned business, does not disclose finances.

To help prevent the spread of the virus, JRayl is implementing paperless transactions where it can and is taking other precautions such as making sure its vehicles and facilities are regularly cleaned, and also enforcing social distancing. While core staff has to be at JRayl’s offices to support drivers, other employees are working from home, he said.

JRayl instituted a new bonus plan for drivers to help them out, Richards said. Hayworth said the bonus pay can mean as much as $300 more a week for a driver.

“From a business perspective, JRayl has for many years been building strong customer relationships,” Richards said. “So I feel really good about that and believe our customers will rebound.”

(from the Akron Beacon Journal)