House Democrats rolled out a $500 billion draft transportation infrastructure bill on June 3 that includes significant investments in the country’s aging roads and bridges, along with a call to strengthen rear under-ride guard standards.

The bill, which has been generally lauded by the American Trucking Associations (ATA) and the International Brotherhood of Teamsters, also suspends changes made to drivers’ hours-of-service (HOS) rules and includes additional measures – as well as funding – to address motor carrier safety.

House Committee on Transportation and Infrastructure chairman Peter DeFazio (D-OR) released text of the Investing in a New Vision for the Environment and Surface Transportation in America (INVEST in America) Act, a key component of the Moving Forward Framework that House Democrats released earlier this year.

“The bulk of our nation’s infrastructure  – our roads, bridges, public transit and rail systems, the things that hundreds of millions of American families and businesses rely on every single day — is not only badly outdated, in many places it’s downright dangerous and holding our economy back. Yet for decades, Congress has repeatedly ignored the calls for an overhaul and instead simply poured money into short-term patches,” DeFazio said. “The result? We’re still running our economy on an inefficient, 1950s-era system that costs Americans increasingly more time and money while making the transportation sector the nation’s biggest source of carbon pollution.

“That all changes with the INVEST in America Act. The INVEST in America Act is our opportunity to replace the outdated systems of the past with smarter, safer, more resilient infrastructure that fits the economy of the future, creates millions of jobs, supports American manufacturing, and restores US competitiveness.” 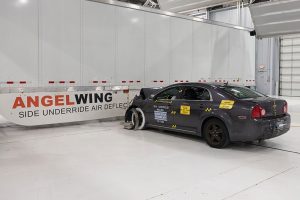 The Insurance Institute for Highway Safety conducts a crash test with an AngelWing side underride protection device from Airflow Deflector Inc. (Photo: IIHS)

Included in the Motor Carrier Safety portion of the INVEST Act, the under-ride protection section – incorporating stand-alone legislation introduced a year ago — calls for new trailer standards to be revised to include rear impact guards that are designed “to prevent passenger compartment intrusion” when a passenger vehicle traveling at 35 miles per hour (mph) makes:

The bill would require “full compliance” no later than two years after the date on which a final rule is issued.

Additionally, the section calls for additional research on the design and development of rear impact guards that can prevent under-ride crashes and protect motor vehicle passengers against severe injury at crash speeds of up to 65 miles per hour.

The legislation likewise supports research to better understand the effectiveness of side under-ride guards and to develop performance standards.

Finally, the bill would require the Secretary of Transportation to establish an Advisory Committee on under-ride protection “to provide advice and recommendations” to the Secretary on safety regulations to reduce crashes and fatalities involving truck under-rides. Committee membership would include two representatives of each of the following: 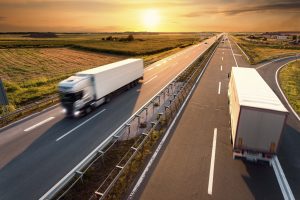 Regarding trailers, the Americans for Modern Transportation – a coalition of major shippers and logistics companies – sees the House infrastructure framework as an opportunity to consider “modernizing outdated regulations” and to increase the national twin trailer standard from 28 feet to 33 feet.

“Now is the time to update this nearly 40-year old federal standard as the U.S. Department of Transportation only expects freight volumes to increase. Improvements would benefit consumers, businesses and so many others across our country.”