Nikola plans to start building the first prototypes of its fuel cell electric cab-over truck in the second quarter with the goal of starting on-road trials in early 2022, the company said.

In an update on its North American hydrogen fuel cell electric vehicle commercial truck program, the company said the fuel cell variant of the Nikola Tre cab-over will follow the launch of North American production of the Tre battery-electric truck. 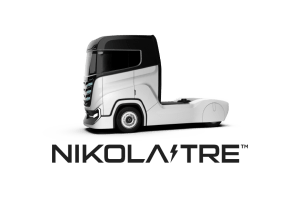 The Tre is based on a Euro-style high cab-over, the Iveco S-Way European cab-over tractor, unveiled in 2019 as the successor to the long-running Stralis model. Nikola partnered with Italian truck maker Iveco to gain the advantage of its manufacturing experience. The relationship will see Nikola’s battery-electric and hydrogen fuel cell technology sold in Europe in Iveco chassis under the Nikola badge.

Following the FCEV version of the Tre, Nikola plans to launch the long-range Nikola Two FCEV Sleeper for ranges of 300 to 900 miles in the North American market, possibly as early as late 2024.

The Nikola Tre FCEV Cabover is targeted for distances up to 500 miles. The company said it is expected to address the majority of the North American regional market, especially where additional freight hauling capacity and quick fueling are required by fleet operators that would make the battery-electric version less desirable. 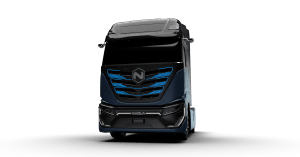 The Tre FCEV leverages the Tre BEV platform with hydrogen fuel-cell power, while being designed to improve aerodynamics and reduce total vehicle weight, according to the company.

The first Tre FCEV prototype builds are scheduled to begin at Nikola’s facility in Coolidge, Ariz., and Iveco’s facility in Ulm, Germany in the second quarter. Testing and validation of the vehicles will continue into 2022, with production planned for the second half of 2023.

The Nikola Two FCEV Sleeper is a long-haul freight solution with hydrogen capacity allowing a non-stop range of up to 900 miles, according to the company. The Nikola Two will leverage the weight advantage of hydrogen in long-range, long-haul zero-emission commercial transportation. It will be based on a new chassis custom designed for North American long-haul routes and is anticipated to launch in late 2024.