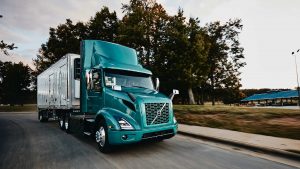 The Volvo VNR Electric model will begin running last-mile delivery routes to restaurants and coffee stores throughout Southern California from the company’s warehouse in Fontana, Calif.

Th Volvo VNR Electric Class 8 truck being leased to QCD is part of the Volvo LIGHTS project, a collaboration between Volvo Trucks North America, the South Coast Air Quality Management District (South Coast AQMD) and 13 other organizations. The goal is to develop a blueprint to successfully introduce battery-electric trucks and equipment into the market at scale.

“We are excited to partner with QCD as it begins its fleet electrification journey. Like so many of our customers, QCD depends on its vehicles to deliver every day, without compromise and without exception,” said Peter Voorhoeve, president of Volvo Trucks North America.

A Golden State Foods (GSF) company, QCD provides custom distribution services to thousands of America’s most iconic restaurants. QCD currently operates a fleet of 700 Class 8 tractors, more than half of which are Volvo VNR and VNL models. Each year, QCD makes more than one million last-mile deliveries from its 26 temperature-controlled distribution centers, according to the company. Drivers average more than 35 million miles on the road annually.

GSF is one of the world’s largest diversified suppliers to the food service and retail industries. The Volvo VNR Electric will be operating various nightly last-mile delivery distribution routes, each totaling nearly 100 miles round-trip.