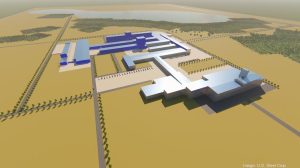 United States Steel Corp. broke ground in Arkansas on the company’s next-generation steel mill. The $3 billion steel-making facility will be the most advanced in North America and largest private project in the history of Arkansas.

United States Steel Corp. broke ground in Osceola, Arkansas, on the company’s next-generation steel mill. The $3 billion steel-making facility will be the most advanced in North America and largest private project in the history of Arkansas, the company said in a release.

“Several years ago, we embarked on a transformative vision for U. S. Steel,” said David Burritt, president and chief executive of U. S. Steel. “This facility is engineered to bring together the most advanced technology, to create the steel mill of the future that delivers profitable sustainable solutions for our customers.’’

The plant will be adjacent to U. S. Steel’s Big River Steel. Together, the two facilities will be known as Big River Steel Works. The new plant is expected to bring 900 plant jobs to the area, along with thousands of construction jobs, according to U.S. Steel.

“Last month, we announced that U. S. Steel would build a new state-of-the-art mill in Osceola,” Arkansas Governor Asa Hutchinson said. “We are excited to break ground on the project. Once it is finished, it will be the largest single project investment in the state’s history. This is a great opportunity for Arkansas.”

“It is with great pride that we break ground on U. S. Steel’s latest endeavor in Arkansas,” Arkansas Secretary of Commerce Mike Preston said. “Once this mill reaches full production, Mississippi County will be the largest steel-producing county in the nation.’’ 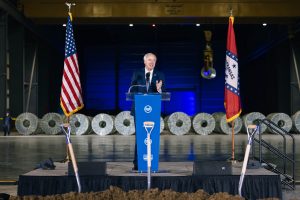 Arkansas Governor Asa Hutchinson inspires audience with vision of how the new steel mill will bring economic growth to Arkansas.

Project completion and full operation is anticipated by 2024. Upon completion, this project will apply to become LEED certified.

Founded in 1901, United States Steel Corp. is a leading steel producer. With a renewed emphasis on innovation, U. S. Steel serves the automotive, construction, appliance, energy, containers, and packaging industries with high value-added steel products such as U. S. Steel’s proprietary XG3™ advanced high-strength steel. The company also maintains competitively advantaged iron ore production and has an annual raw steelmaking capability of 22.4 million net tons. U. S. Steel is headquartered in Pittsburgh, Pennsylvania, with world-class operations across the United States and in Central Europe. For more information, please visit www.ussteel.com.