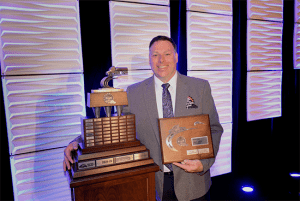 Frain has more than 30 years of professional driving experience and has served as tank-truck driver for Highway Transport, a leader in bulk chemical transportation, for seven years. He has more than 2 million accident-free miles.

“Tom represents all of the drivers and team members of Highway Transport – and he represents the best of us,” said Highway Transport chief executive Marshall Franklin said. “Tom works to contribute his time, insight, expertise and enthusiasm to help us serve our customers better, to make our company stronger, to make the industry better and to make the roadways safer. We are not surprised, but we are elated and proud of this recognition, and the Highway Transport family congratulates Tom on this well-deserved honor.”

Frain is the eighth person to win the tank truck sector’s top driver honor. The Professional Tank Truck Driver of the Year Award recognizes an exemplary tank-truck company driver or independent contractor who serves the industry with the most reliable and safe transportation of liquid and dry bulk commodities. The winner represents the best the tank truck industry has to offer with a demonstrated record of safety and a tireless involvement in community and charity organizations.

“Congratulations to Thomas Frain,” NTTC President and Chief Executive Ryan Streblow said. “This year’s contest was especially competitive with dozens of drivers from across the United States and Canada in the running. Thomas Frain set himself apart – not only with an impressive two million accident-free miles in his career, but his dedication to family and community as well. With Great West Casualty Co.’s continued support, we’re honored to showcase the incredible safety record and professionalism displayed by Thomas Frain.” 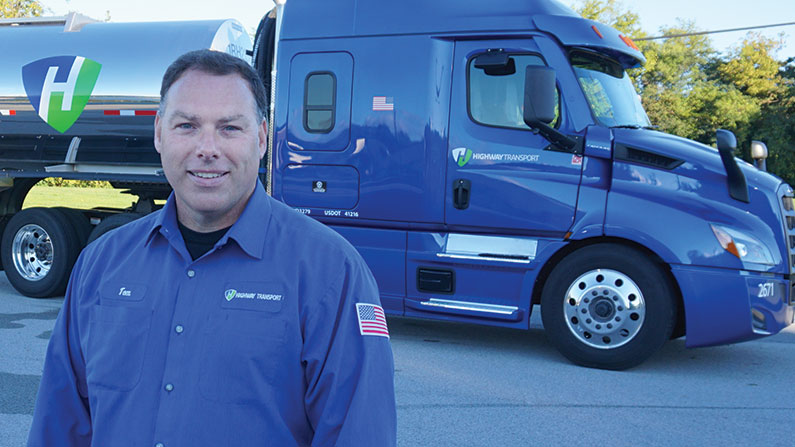 NTTC Names Tom Fain Top Driver Of The Year – Frain has more than 30 years of professional driving experience and has served as tank-truck driver for Highway Transport for 7 years.

As the Professional Tank Truck Driver of the Year, Frain becomes the face of driver safety in the tank truck industry, according to NTTC. He will attend NTTC events to speak on the importance and value of safety and will serve as a spokesperson for the association, “offering the perspective of the drivers whose hard work is the backbone of the industry.’’

Steven Hittinger, manager of Highway Transport Service Center, wrote about Frain in a recommendation: “He has served as a driver trainer at the Knoxville terminal for the past four years. During that time, he has demonstrated great leadership traits. He works closely with the safety department to develop training videos and serves as instructor and mentor for new drivers in hands-on training classes. Tom is always willing to contribute to any effort that improves the safety of our operations and benefits the company, fellow employees and the motoring public.”

Frain lives in Knoxville, where Highway Transport is headquartered, and where he also volunteers with Boy Scouts of America, American Youth Soccer Organization (AYSO), Little League USA Softball and other organizations. He is a first-generation truck driver. During the NTTC award presentation, it was said about Frain that his goal is to inspire someone, even just one person, and to help that person succeed and rise to the top:

“Tom wants to be that third person in the relay, the individual who hands the baton to the fastest person on the track who gets the honor and wins the gold. Tom is not looking for the fame and the glory. He knows the success he has had in life has come from watching those he has helped succeed.”

Upon receiving the award, Frain recognized and thanked NTTC; his fellow finalists and their families; his wife, Carol; the Watkins family who owns and operates Highway Transport; Marshall Franklin; Highway Transport service center manager Steven Hittinger; vice president of safety and quality Rick Lusby; and all of the Highway Transport team.

“Thank you for this distinct honor,” Frain said. “This has been 30 years in the making, with the last seven being the most rewarding as a tank-truck driver. There are too many people to thank, but first and foremost, many years ago, my mother-in-law gave me a medallion with angel wings, and on the medallion, it says: ‘Never driver faster that your guardian angel can fly.’ ”

Highway Transport also will be recognized to help celebrate Frain’s accomplishments, being permitted to showcase the traveling William A. Usher, Sr. trophy until the next contest cycle. The NTTC Tank Truck Driver of the Year trophy’s official name pays homage to Usher, from Usher Transport Inc., for his extensive career in and service to the tank-truck industry. Usher was active in NTTC for more than 40 years.

Frain’s recognition comes on the heels of Highway Transport announcing that the company has achieved a record number of professional drivers on staff thanks to the company’s recent and continued efforts to celebrate, support and reward its elite team of tanker-truck drivers. The company is achieving its 2022 goals for driver count, through both recruiting and retention, by enhancing Highway Transport programs that support individual drivers, owner-operators and the entire team across its 17 U.S. service centers.

“Highway Transport supports drivers in ways that make their daily lives easier and better, through its CARE program (Communicate, Appreciate, Respect, Evaluate); focus on safety; investment in best-inclass facilities and equipment; efforts to give drivers more flexible home time; redesign of the owner- operator program to help these drivers achieve success as entrepreneurs; investment in technology upgrades that support drivers; robust benefits package; substantial pay increase in 2022 of up to 20 percent for drivers, depending on their experience and location; and much more,’’ according to the company.

“Thanks in great part to the diligence and safety record of its drivers, including Frain, Highway Transport earned the Responsible Care® Partner of the Year Award from the American Chemistry Council in 2019, 2021 and 2022.’’

Highway Transport also has received recognition as a “Top 20 Company” for women by Women In Trucking.

Highway Transport also has received recognition as a “Top 20 Company” for women by Women In Trucking.