The environment for shippers is said to be benign right now, but there’s rate and supply trouble coming later in the year, according to the Shippers Conditions Index (SCI) compiled each month by transportation forecasting firm FTR. Capacity is expected to get steadily tighter throughout the year, climaxing early in 2018. 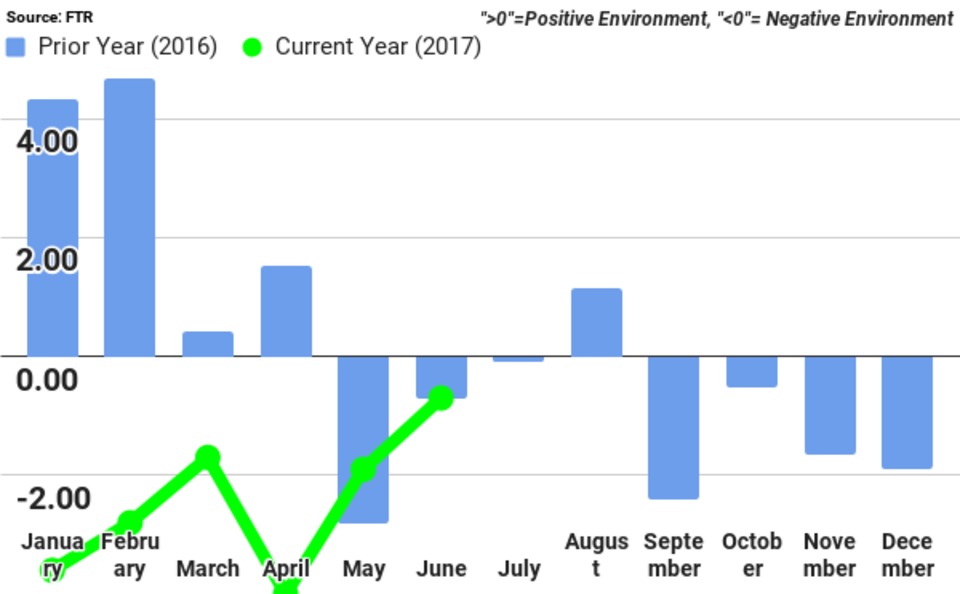 It’s possible, FTR notes, that the deregulatory stance of the Trump administration could temper some of the capacity concerns, especially if the electronic logging device (ELD) mandate is altered to be more friendly to trucking companies and owner-operators.

The most recent SCI score recorded by FTR came in at 1.9, which is good news since any reading above zero indicates a favorable environment for shippers, according to officials at FTR.

“Freight markets are currently operating at a relatively optimal level, with plenty of capacity to carry small increases in freight levels,’’ said Jonathan Starks, FTR’s chief operating officer. “This continues to give transportation managers the opportunity to focus on negotiating the best rates. However, the shipping environment is approaching a transitional time, with the potential for significant capacity shortages by the end of the year.’’

Although the Trump Administration has suggested it plans to reduce the regulatory burdens on companies, Starks still thinks the electronic logging device (ELD) rule is a safe bet to be implemented in December.

“As of now, the main uncertainty relates to the enforcement environment,’’ Starks said. “Without a clear answer from an administration that is still in its infancy, shippers are wise to prepare for a full implementation, and to send clear signals to their carrier base that they need to be in compliance as well.’’

Starks cautioned shippers to “keep an eye on how your negotiated contracts would be impacted by a severe capacity shortage. It may be wise for transportation managers to begin thinking about securing capacity, rather than focused on a purely rate-based negotiation.’’

In other, mostly positive news, throughout the U.S. economy “there is a growing number of data points that suggest that the worst is over and the economy is getting better,’’ said Donald Broughton, senior transportation analyst with Avondale Partners and author of the monthly Cass Freight Index for Cass Information Systems. In January, the Cass Shipments Index increased 3.2 percent year-over-year, the latest in a string of recent events that indicates the overall freight recession, dating back to March 2015, might finally be over. Other promising signs, according to Broughton, include the surge in the price of crude, the fracking of drilled but uncompleted wells, and an increase in consumer spending.

Since January, however, the price of oil has retreated and major carriers soon will have to deal with an expected rise in diesel prices due to Hurricane Harvey.

As for the the increase in freight volumes, Broughton said the upturn is largely due to parcel shipments associated with e-commerce. Air freight, too, has shown sequentially improving strength, he said.

Rail volumes have been a significant part of the weakness in freight flows over the past two years, but “lately they’ve become increasingly less bad,’’ Broughton said, adding that in recent weeks rail volumes have turned positive.

As for trucking, though, over the past six months, “the data coming out of the trucking industry has been both volatile and uninspiring,’’ he said.