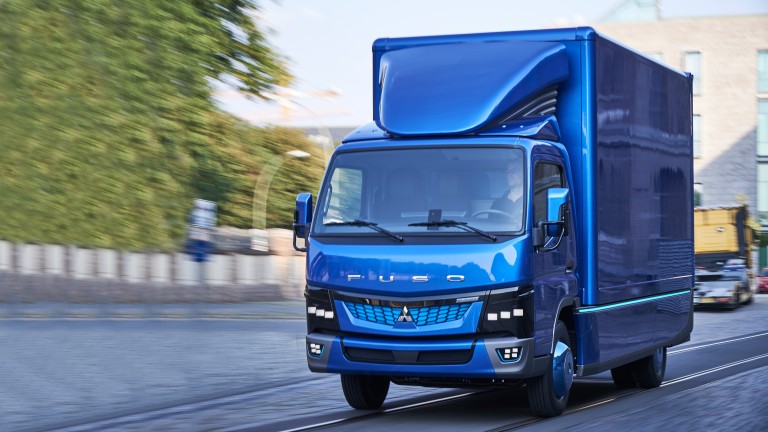 For starters, Palmer said that not only are all-electric trucks made by his company commercially available right now, so are models from other original equipment manufacturers (OEMs) as well, with more on the way.

On top of that, the basic ownership structure of the commercial truck world is changing, with many fleets in the long-run potentially switching from “buying” trucks to leasing them or using mobility-on-demand contracts.

“The future is here — we’re delivering our eCanter electric truck to our customers in the first few months of 2018, both on the East and West Coast. Exciting days in front of us,” he said.

“But that is the short view. In the long view, I believe personally that the entire commercial truck industry is going there  — going electric, going autonomous, offering new solutions that are more than just owning trucks, owning the hardware,” Palmer noted.

He added that the urban delivery segment is “leading the way” when it comes to those trends – especially in electrification, as electric propulsion “suits and fits” those much more “short-range” delivery needs.

In Palmer’s view, it will take a little bit longer to electrify the long haul Class 8 sector and other heavy duty truck segments, but it will come in time.

“A few trends are coming together lately — especially urbanization. People are moving back into the cities. The population around the world is also growing, so cities are becoming denser,” he added. “Environmental ‘green’ trends are getting stronger and stronger, too, with a lot of OEMs and businesses looking for ways to find efficiencies and lower their cost of operation.”

According to consulting firm IDTechEx, the United Nations among other global organizations predict that 80 percent of the world’s population will be living in cities in 2050.

That will also spur more demand for last-mile delivery services, which the firm believes will predominantly be electrified. In a report IDTechEx issued last year, Last Mile Electric Vehicles 2018-2028, the “last-mile” portion of a delivery currently eats up 55 percent of its total shipment cost, while also increasing air pollution. The firm said in its report that electric vehicles “leveraging autonomy” will transform the last-mile segment, including the courier business.

“In addition to introducing no-paper deliveries, we have been preoccupied with eco-friendly alternative drive-trains for a long time,” said Nicolas Rottmann, head of Rhenus Home Delivery. “The eCanter is now giving us an opportunity to test battery-based electric vehicles in our fleet. On account of short distances from our central warehouse in Hoppegarten to our end customers, the inner city of Berlin provides an ideal surrounding for a sustainable all-electric vehicle.”

That’s one reason why Palmer said Mitsubishi Fuso is developing an “electric variant” for all of its truck and bus models in the coming years.

But that’s not the only change. He added that the European fleets now acquiring eCanter trucks are doing so via a 24-month, long-term rental from CharterWay, a commercial vehicle rental and leasing entity owned by Daimler AG, Mitsubishi Fuso’s parent company.

That part of the program also speaks how views of vehicle ownership are changing.

“Millennials don’t want to own a car or many other things; they just want to own solutions,’’ Palmer said. “They want to move things from one place to another, but not own the trucks doing the moving. They do not want to deal with logistics and everything involved in owning hardware. All they want to do is solve their needs.’’

You then combine that trend with technological developments in telematics, connectivity, electric vehicles, with the “shared model” for cars – “the Uber model,” as Palmer emphasized – it then becomes clear that electrification “is just one tool” to address all the other changes coming along.

“In some ways, in a natural way, it’s a little scary for this industry to face,” he said. “But at the same time it is super-exciting; there are all kinds of opportunities and startups looking into these developments. We’re not sure where it’s all going yet. We are still really trying to identify the right combination of technologies and the future business strategies that will use them.”

(This article was originally reported by Fleet Owner)