Emissions regulations have been on the minds of over-the-road drivers for some time now. It began with the implementation of exhaust gas recirculation (EGR) systems, then progressed to the diesel particulate filter (DPF), and now the buzz is around selective catalytic reduction (SCR).

SCR systems use a consumable diesel exhaust fluid (DEF) in conjunction with a catalyst to reduce nitrous oxide (NOx) emissions. Because the fluid is consumed during the system’s normal operation, it requires the vehicles owner to not only monitor the fluids level but also refill it when it’s been used up. Here is some useful information on the fluid that truck operators need to buy. 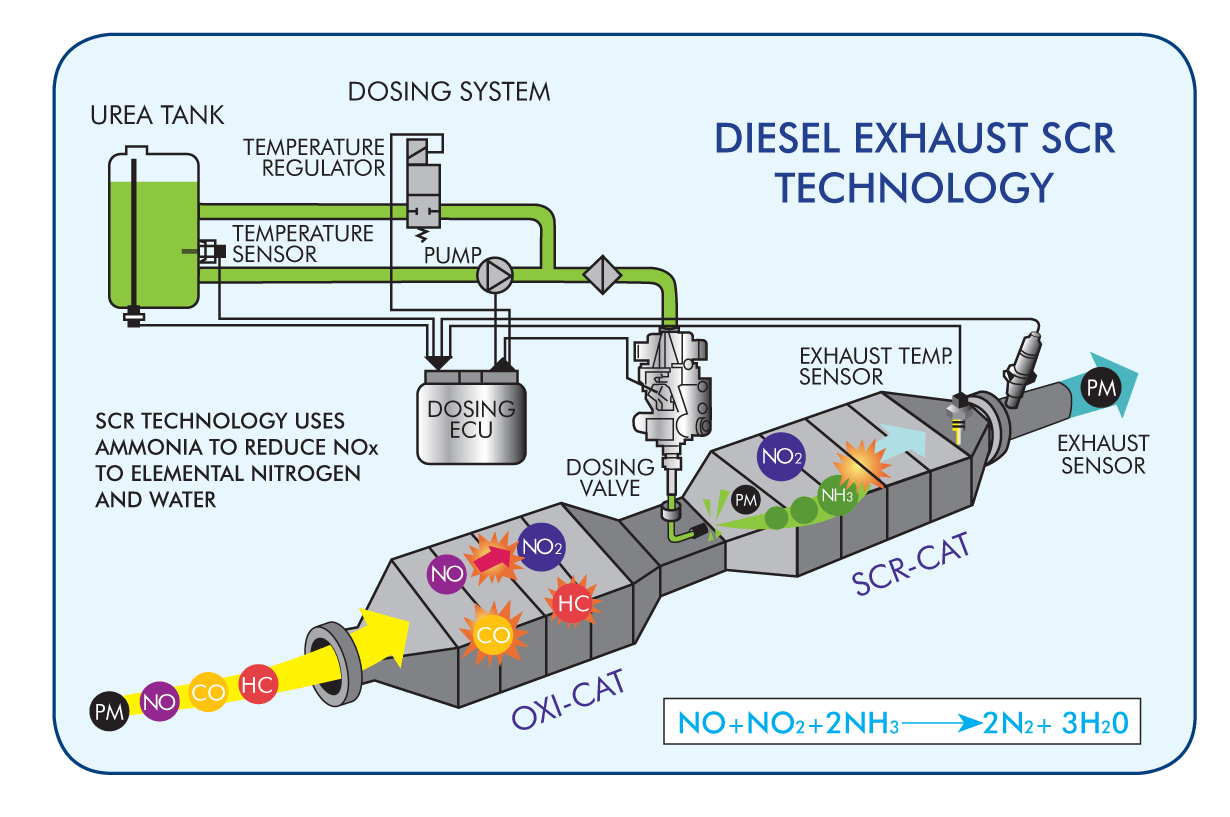 SCR technology uses ammonia to break down NOx emissions produced during diesel combustion into nitrogen and water. SCR has become the technology of choice for a majority of truck and engine manufacturers to meet the stringent 2010 emissions standards set by the EPA for heavy-duty trucks.

The biggest benefit of SCR for the vehicle owner is in the fuel savings the technology provides. Because SCR deals with NOx outside the engine, manufacturers are once again able to tune their engines to run more efficiently and produce more power. The increase in engine efficiency also leads to a reduction in particulate matter, resulting in less frequent regeneration of the DPF and adding to the increased fuel economy.

SCR works by first routing exhaust gases through an oxidation catalyst, which removes hydrocarbons and converts a small amount of NOx to NO2. The next step requires an injection of an aqueous urea solution, DEF, into the exhaust stream at a precise dosing rate. Exhaust fluid is converted into ammonia, which reacts with the remaining NOx in the SCR catalyst to produce harmless nitrogen and water. A final catalyst is sometimes installed downstream of the SCR catalyst, which is designed to remove any remaining ammonia from the vehicle’s exhaust.

DEF is a mixture of synthetic, high-purity urea and deionized water. This liquid is clear, nontoxic, nonflammable, non-explosive, and generally nonhazardous. Additionally, DEF is classified as a minimum risk for transportation. The fluid is mixed at a ratio of 32.5 percent formaldehyde-free low biuret urea and 67.5 percent deionized water. Heavier than diesel, exhaust fluid weighs 9.1 pounds per gallon, and while it will freeze at 12 degrees, its composition and quality are not affected by freeze or thaw.

It is recommended that exhaust fluid be stored between 40 and 80 degrees, and it has an effective shelf life of one year when stored at 80 degrees. Prolonged storage above 86 degrees will cause hydrolysis to occur. The most important quality of diesel exhaust fluid is its purity. For example, one teaspoon of salt would contaminate 5,000 gallons of DEF.

SCR systems are very sensitive to potential impurities, so it is essential that exhaust fluid remain uncontaminated, and that consumers only purchase fluids that adhere to the ISO 22241 quality standard and never try to mix their own. In Europe, the German Association of the Automotive Industry (VDA) controls the “AdBlue” trademark and uses it to ensure DEF quality standards are maintained in accordance with DIN 70070, which is similar to the United States’ ISO 22241.

One of the biggest complaints about the use of SCR is the fact that eventually you are going to run out of exhaust fluid. Refilling your vehicle’s DEF tank is a whole lot easier than the dealer might make it seem.

As of now, BlueDEF brand exhaust fluid is available at most truck stops across the country, making it easy to locate, and new brands and retail outlets are popping up constantly. Since DEF is nontoxic, virtually anybody can refill his or her vehicle simply by purchasing the proper amount of fluid and locating the fill port, usually next to the fuel filler, under the hood, or in the trunk if it’s a diesel-powered car or SUV that needs filling.

People can potentially save hundreds of dollars by simply replenishing the fluid themselves.

The worst thing that can happen to an SCR system is being filled with contaminated or incorrect fluid. This can potentially cause thousands of dollars in damage to the emissions system and leave drivers stranded. What can also leave drivers with a thumb out by the side of the road is running the DEF tank dry. The EPA requires vehicle manufacturers have measures in place to ensure equipped vehicles cannot run without exhaust fluid.

Vehicle manufacturers all handle this in slightly different ways. Some employ the use of a gauge, while some have a simple warning light. Generally speaking, however, when the DEF tank level drops below 10 percent, a warning of some kind will be displayed on the dash, indicating it’s time to fill up.

The warnings will get progressively more frequent, brighter, or louder as the level continues to decrease. If the vehicle is allowed to run out of fluid, one of two things will happen: either engine power will be cut and speed limited to essentially a “limp-mode,” or the vehicle will not start until the fluid is replenished.

Contents hide
I Why SCR?
I.I How DEF Works
I.I.I Do It Yourself
I.I.II Warnings