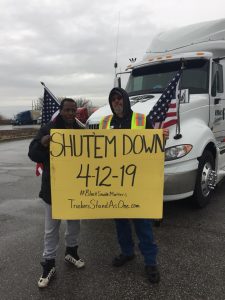 A group calling itself Black Smoke Matters is trying to organize a shutdown of truckers on April 12 to protest a variety of conditions affecting drivers, including hours of service and training levels.

The group organized a previous protest on Oct 6, 2018, that slowed and stopped traffic along Interstate-95 in Washington, D.C., for several minutes in protest of over-regulation of the trucking industry.

Black Smoke Matters is now asking truck drivers across the nation to join it on April 12 and shut down their trucks for the day. Specifically, the group has laid out the following platform for the protest: 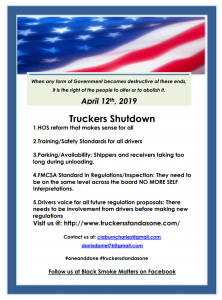 The group’s mission statement on its website reads: “When any form of government becomes destructive of these ends, it is the right of the people to alter or to abolish it.”

Emails to Black Smoke Matters for additional comment and information on the protest have not been returned. It is unclear how much momentum the movement has gained to date.

FMCSA Reaches Out To Industry

FMCSA,  under Ray Martinez, spent much of 2018 trying to connect with truck drivers and other industry participants. Martinez has spoken numerous times as events, including at the Mid-America Trucking Show, and took questions from drivers. 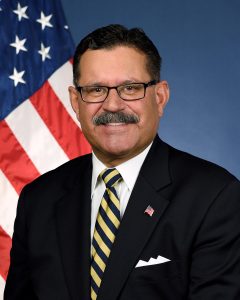 He noted that the introduction of electronic logging devices may have triggered another issue within hours-of-service regulations. To that end, the agency issued a preliminary notice seeking comment on proposed changes to hours-of-service rules. FMCSA is specifically considering:

In an interview last year, Martinez said he was interested in learning more about the industry’s issues to see where the agency could act.

“When people tell me they are on the clock and they are stuck when they say ‘I was there for three, five, six hours,’ well, I’m not sure how that happens, but I’m sure it does,” Martinez said. “Are there abusers of the systems? Were folks being put in that position on a regular basis? That is something we need to know.”