The recent trend in the global liquid propane gas (LPG) market is related to demand-supply dynamics of LPG. This includes shift of over-dependency of supply of the cooking gas from the Middle-East region to a more decentralized worldwide production of these gases.

Additionally, eastern regions including Asia-Pacific have a high demand-supply gap, and thereby are forced to import the gas to fulfill their domestic requirements.

Another factor influencing the market is the shale gas revolution in the North America region, and its coherent and surplus production.

LPG and Its Market

LPG is a mixture of propane and butane. It is flammable in nature, and therefore stored in pressurized steel vessels. It’s produced during petroleum refining (crude oil), and is mainly obtained from fossil fuel sources, or obtained from petroleum or natural gas streams.

It is commonly used as fuel in cooking equipment, heating appliances and as a refrigerant and aerosol propellant. The LPG market is segmented on the basis of application, source and region.

On the basis of application, the LPG market is categorized into residential and commercial, chemical, industrial, refineries, automotive fuel, and others. Residential and commercial categories accounted for a significant share in the market. There is widespread dependency on LPG as a cooking fuel among the rural and urban populations across the Asia-Pacific and Latin-America regions.

Based on source, the LPG market is classified into refineries, associated gas, and non-associated gas. The source of the fuel varies with area, for instance, the majority of the gas production in North America is derived mostly from natural gas processing units, whereas Asia-Pacific is dependent on refineries for its production.

On the worldwide scale, refineries are one of the foremost sources of production of various gases.

Based on region, the LPG market is categorized into North America, Europe, Asia-Pacific, Latin America, and Middle East and Africa. In recent years, the Asia-Pacific region has been a pivotal absorber of LPG supply volumes. The region has witnessed significant demand for cooking gas. Its high requirement in China and India is expected to play a major role in affecting demand dynamics of the market. Recent developments in the shale gas production ecosystem in the U.S. are further expected to augment production of feedstock and increase the production volumes of the cooking gas. 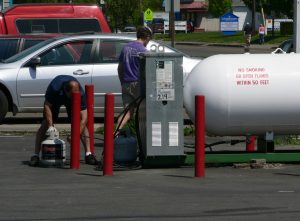 Retail sale of propane in the United States

Government initiatives – such as streamlining subscription processes and payments, delivery of cylinders, and subsidies for cylinders – have resulted in increasing adoption of the gas mix as a domestic fuel.

Other factors expected to drive demand in the LPG market include increased production of petroleum feedstocks and development of new pilot plants to refine or extract the gas from natural sources.

The major restraining factor affecting the LPG market is the flammable nature of the product. Therefore it is stored in large cylindrical or spherical pressurized vessels. Additionally, the flammable nature of the gas leads to additional costs of storage, transportation and disbursement to end users. Another factor negatively impacting the market is the price volatility of crude oil feedstock, which is hampering growth.

The development of petrochemical projects (propane dehydrogenation projects and steam crackers) and new production lines are expected to drive expansion in marine trade of this fuel. Moreover, several LPG production regions such as Canada, Australia and Angola are expected to commence operations in new projects for exploration and production of the gas. This is likely to enhance the exports of the gas, thereby generating opportunity in the international markets.