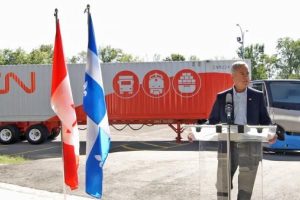 The announcement of the CN acquiring 50 electric trucks is the first time Lion Electric has presented a Class 8 tractor configuration.

The Lion Electric Co. has signed a memorandum of understanding with CN Rail to acquire 50 zero-emission battery-electric drayage tractors. CN says it will place the trucks into last-mile urban service in the Canadian cities of Montreal, Toronto and Vancouver.

In April of 2019, CN launched a pilot program to test the use of custom-built electric trucks engineered by Quebec-based The Lion Electric Co. These zero-emission trucks, slated for intermodal use, will be tested in a variety of situations and environments across the CN network, from urban delivery and container shuttle service, to port operations. Lion Electric says the trucks will remove 100 tons of greenhouse gas emissions from the road annually.

CN connects Canada’s Eastern and Western coasts with the Southern tip of the U.S. through a 19,500-mile rail network. It operates intermodal operations in major Canadian centers using it’s own fleet of trucks as well as outside carriers. The company is headquartered in Montreal employs several thousand people in Quebec. CN president and CEO, Jean-Jacques Ruest his is pleased to support Lion Electric’s made-in-Quebec innovation.

This is the first time the company has presented a battery-electric tractor. Previous Class 8 offerings include refuse trucks and straight truck chassis.

The Lion Electric Co. is based in Saint-Jérôme, Quebec, about 30 miles north of Montreal and has offices near Sacramento, Calif. The company manufactures all-electric class 5 to class 8 commercial trucks and buses and minibuses for the school, para-transit, and mass transit markets.