Trucking costs fell in 2019, survey shows the economic softening and slowdown of freight in the second half of 2019, combined with factors such as lower fuel prices, decreased the marginal cost of trucking last year, according to an annual survey by the American Transportation Research Institute (ATRI).

The institute reports that the average marginal cost per mile incurred by motor carriers in 2019 fell 9.3 percent to $1.65. Almost every major line item saw some level of decline. In contrast, during the last freight softening, in 2016, marginal costs still rose by 6 cents per mile. 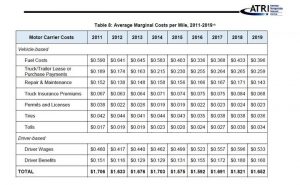 ATRI, the research arm of the American Trucking Associations (ATA), used detailed financial data provided by motor carriers of all sectors and fleet sizes in developing the 2020 update to its “An Analysis of the Operational Costs of Trucking.” This annual research documents and analyzes detailed trucking costs from 2008 through 2019. ATRI’s analysis provides a benchmarking tool for the industry and gives government agencies information on industry finances needed for transportation planning and infrastructure improvement analyses.

The average cost per mile for fleets fell in 2019 due to the reduction of a number of line-item costs, including fuel, repair and maintenance, and wages and benefits. In 2018, trucking encountered record demand and the highest tonnage in the last 20 years. In the contraction that followed in 2019, a number of independent factors were at play to lower operational costs. 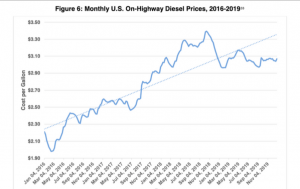 Fuel costs dropped by 9%, reflecting a 12-cent-per-gallon national decrease in average diesel fuel prices from 2018 to 2019

However, ATRI found that private fleet truck costs increased in 2019, from $2.73 in 2018 to $2.80. While National Private Truck Council cost metrics include fixed “administrative” costs, ATRI said it should be noted that those administrative costs dropped from 29 cents per mile in 2018 to 24 cents per mile in 2019. The growing cost differential between for-hire and private fleets may move more private fleet trips to for-hire carriers in the future, ATRI said.

Combined driver wage and benefits dropped slightly in 2019 – from 77.6 cents per mile in 2018 to 69.3 cents per mile – a counter-intuitive decrease given the driver shortage. However, bonuses for drivers universally increased, with retention bonuses showing increases of more than 80 percent.  While the cost per mile for total driver compensation fell, carriers are clearly addressing the driver shortage through other mechanisms, ATRI found.

The full report can be downloaded @ ATRI here.