Speeding up commercial truck traffic will be a priority when the Pharr-Reynosa International Bridge’s largest expansion project in history is completed in 2023, said Luis Bazán, general director of the South Texas bridge.

The expansion includes building a second international bridge in Pharr, along the U.S.-Mexico border to add cargo capacity and reduce wait times for commercial trucks. 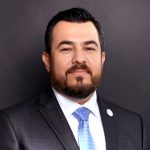 The 3.2-mile Pharr-Reynosa International Bridge currently has four lanes, handling commercial and passenger vehicles. The expanded bridge could accommodate another 800 trucks a day, according to Pharr officials.

The project received a boost Dec. 31 when transportation officials issued a permit authorizing the expansion.

The Pharr-Reynosa International Bridge was the second-busiest commercial truck crossing in Texas during 2020 and the third busiest on the Mexican border.

The busiest U.S.-Mexico border commercial land ports for trucks in 2020 were:

The Outbound Tender Volume Index (OTVI), published by FreightWaves and available on the SONAR market dashboard, measures volume out of key freight markets. 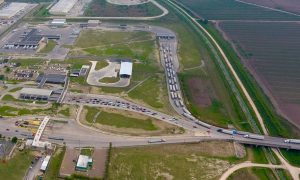 As of mid March, McAllen, Texas – which includes the Pharr-Reynosa market – had seen a 28-percent increase in outbound load volume year-over-year.

The Pharr-Reynosa International Bridge, which connects Texas to the Mexican city of Reynosa, totaled $33 billion in trade for all of 2020.

“It was a record year for us in 2020, especially for produce,” Bazán said. “Even with the pandemic, throughout the summer months we were bringing in about 15,000 shipments per month, which is kind of unheard of for a summer period.”

The Pharr bridges’ top three imports for 2020 were televisions and computers at $2.31 billion; avocados, dates, figs and pineapples at $1.43 billion; and electrical boards, panels, switches at $993 million, according to data from the U.S. Census Bureau.

Bazán said the next step is getting the environmental clearance needed to proceed with construction.

“Once we get the environmental clearance, then we get into the conceptual plans on both sides of the [U.S.-Mexico] border to finalize plans,” Bazán said. “It’s looking like we’re going to start construction within the first quarter of 2022. It’s a 14-month construction period to build the entire second span of the bridge.”

Bazán said connecting lanes on both sides of the border from the existing bridge to the new span will be built for emergency and contingency situations.

“We are looking at 2023 by the time we’re done building the new bridge. It’s a very aggressive timeline,” Bazán said. “The trucks keep coming, they never stop.”