Port of Los Angeles, America’s largest container gateway, looks destined to max out this peak season. In fact, it may be maxing out right now, putting some Christmas retail sales at risk, analysts say.

In August, all of the port’s congestion indicators were flashing red. Conditions at anchorages, terminal yards, rail-heads and warehouses were deteriorating across the board. 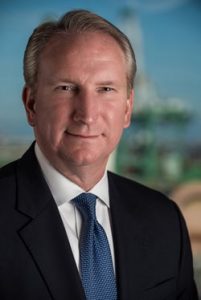 Warning Lights Flashing At LA Ports – “Every aspect of the supply chain is under scrutiny,’’ said Port of Los Angeles Executive Director Gene Seroka. “There’s no one lever we can pull right now, but all options are on the table.”

“Every aspect of the supply chain is under scrutiny,’’ said Port of Los Angeles Executive Director Gene Seroka. “There’s no one lever we can pull right now, but all options are on the table.”

Two months ago, Seroka estimated that July throughput “will likely land between 950,000 and 1 million 20-foot equivalent units (TEUs), depending on the anchorage situation.”

The port fell considerably short of that: July total throughput came in at 890,800 TEUs.

Meanwhile, the collapse of exports from os Angeles continues. Loaded outbound volumes in July totaled only 91,440 TEUs, down 28 percent year on year. It was the lowest monthly export tally since February 2005.

“Our largest export commodity continues to be air as we reposition empty containers back to Asia,’’ Seroka said. 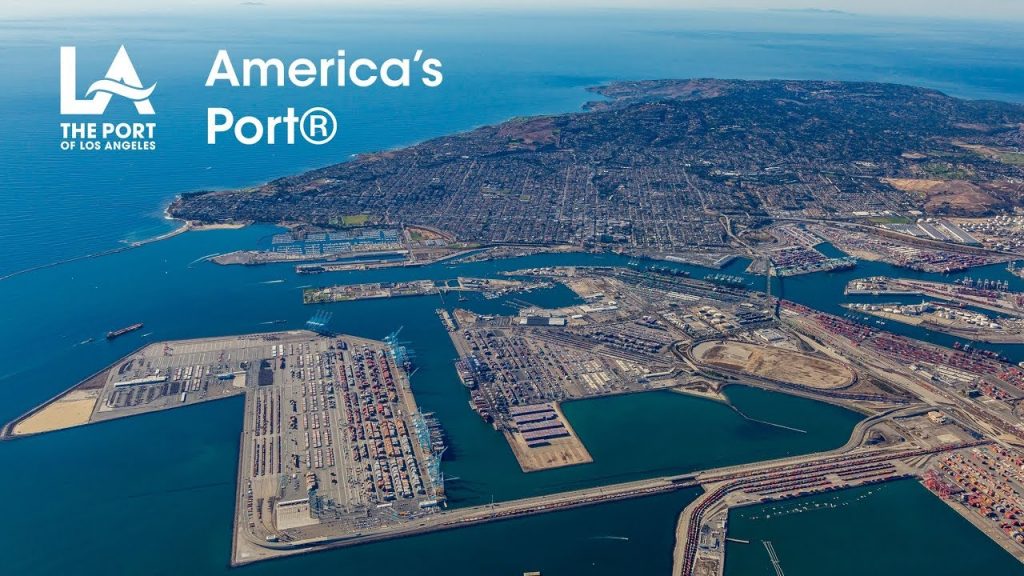 Could the actual numbers come in lower due to congestion, as was the case in July? 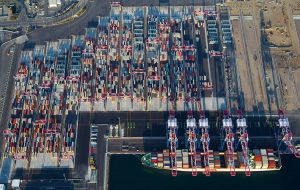 Inbound ships are already piling up at the San Pedro Bay anchorages of the ports of Long Beach and Los Angeles, with 37 container vessels at anchor, three short of the record set on Feb. 1 and quadruple the low set on June 18.

“Both anchorage and dwell times are trending in the wrong direction,” Seroka warned. “In July, 75 percent of ships were stopped at anchor before heading to berth, up from 50 percent in June. Early data for August shows that 90 percent of arriving vessels are headed straight to the parking lot.” That’s the same percentage that went straight to anchor in February amid the previous congestion peak.’’ 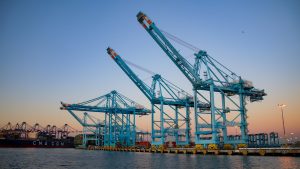 Warning Lights Flashing At LA Ports – Average container dwell time at the terminals is now “at its peak of about 5.3 days,’’ Seroka said. Street dwell time at warehouses is 8.3 days…

“Dwell times on rail have increased because of this but containers had no place to go,” said Seroka, who believes the railroads had no choice but to throttle volumes.

“Let me sum it up this way: Warehouses are overflowing. Rail yards and carriage are maxed out. Chassis and containers continue to be hard to come by. Ships are coming in and waiting at anchor to get worked. And factories are behind in orders, even though output is at record levels.”

If the trans-Pacific shipping system maxes out soon, some Christmas retail sales could be at risk.

When asked about holiday demand, Seroka said, “We’ve seen an early pivot to peak season by the import community to make sure they take into account these knots in the supply chain and the overall transit time they need to get the products in. The import community is going to have to digest this surge in cargo at an even faster rate than they’ve shown a propensity to do before.’’

“As for American consumers, they should take a look online early and go to their favorite retail stores in the neighborhood a little bit earlier than normal with their list for the year-end and Christmas holidays,” he advised.

“Everybody’s going all out to try to make sure that we meet these important milestones,” Seroka said. “This incredible sustained demand has everyone pushing at top speed, yet we still have much more work to do.”