In April, 27 State Driver Licensing Agencies (SDLAs) were closed, along with most government offices, due to COVID-19 concerns. If someone wanted to obtain a commercial driver’s license (CDL) and join the trucking industry, or even a commercial learner’s permit (CLP) to get started, there was only a 50-percent chance the state would permit it.

The odds have improved to 66 percent, with only 17 states completely closed now, but several roadblocks still remain between prospective drivers and a job in trucking.

For starters, states with “open” departments of motor vehicles may have fewer available testing sites and be limited in appointment availability, hours open and staff to administer the tests. And due to social distancing, in-cab training may be limited to one-on-one, down from three-to-one. Combined, these factors create a clear bottleneck and a big problem.

“We are licensing a fraction of the commercial drivers as would have been produced under ‘normal’ circumstances,” said Don Lefeve, president and chief executive of the Commercial Vehicle Training Association (CVTA), which represents nearly 200 training providers. “Given this impediment, and other impediments such as CDL skills testing backlogs, we believe our nation will produce an estimated 60 percent of the commercial drivers compared to a normal year.” 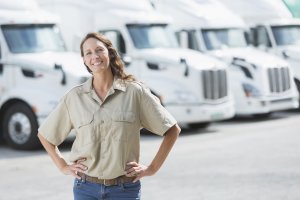 CVTA members train 50,000 commercial drivers annually. According to industry estimates, prior to the coronavirus, there was a shortage of 60,000 drivers.

To protect the supply chain, CVTA led a coalition of several dozen vested groups –  from trade associations to trucking schools to fleets – that lobbied Congress and the National Governors Association to officially declare CDL schools and SDLAs as “essential services” and enact new rules that would grant the federal department of transportation secretary temporary authority (180 days or less) over CLP and CDL testing.

The idea of the proposed legislation would be that state-licensed or secretary-approved CDL schools, motor carrier training programs and other authorized bodies would train, test and certify new drivers. This would be a faster and more comprehensive avenue than getting each state legislature to amend laws. Lefeve noted some governors have chosen to shut down all services

The Federal Motor Carriers Safety Association (FMCSA) has cut some red tape and relaxed some rules on having the physical CDL card, as well as CDL and CLP renewals and medical examinations and certifications.

State DMVs still administer the knowledge tests for prospective drivers to obtain a commercial learner’s permit and the road skills and driving examination to get a CDL. The skills portion may be administered by a third party, but FMCSA guidelines say an authorized employee of the state must supervise knowledge testing.

Because California is closed and Arizona is open, students at one San Diego trucking school who were able to procure CPLs were then bused to the Arizona state line to complete the skills portion. A CPL is valid for 180 days. Normally, a trainee must wait at least two weeks between getting the CPL and taking the skills test, though that has also been temporarily waived. The FMCSA is contemplating extending the validity to one year.

The overall training process from start to finish takes two to three months, Lefeve said. This includes trucking school, licensing, and carrier finishing programs. Under current conditions in open states, drivers who start now might be driving solo by August.

With a historically bad economy and forecasts for a 30-percent GDP contraction in the second quarter, the driver pool is deep enough now, but the future is what Lefeve is worried about.

“Demand is down but we’re not producing any new drivers in 17 states,” he said. Paired with all testing centers decreased capacity, Lefeve said this will lead to a “dramatic decline” in producing trained drivers and “will have a tremendous impact on our recovery.”

Economist Noël Perry, principal of Transport Futures and chief economist of the Transportation Intermediaries Association (TIA), said right now there is a driver surplus, but asked, “When a snapback comes, will there be drivers?”

He, too, cited the training lag time as a “modest problem” and agreed preventative action on that front will ensure driver supply is not the thing keeping the economy from rumbling back.

“The big variable will be how fleets downsize and how they come back,” he said. “If they downsize aggressively, there would be problems regardless, because it takes time to get people back.”

In a 2019 driver shortage report, the American Trucking Associations pointed out this is what happened in the last severe economic downturn:

“During the Great Recession that started in 2008, the driver shortage was erased, but only because industry volumes plummeted, resulting in fewer drivers needed. However, as industry volumes began to recover in 2011, the shortage slowly returned,” according to ATA.