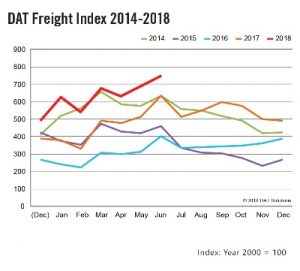 Spot truckload freight activity in June rallied to record highs for the number of available loads, while rates rose to their highest points in nearly two years, according to the DAT North American Freight Index.

The June Freight Index increased 24 percent compared to May and was up 57 percent year over year, capping a robust first half of the year, according to DAT.

Brokers and shippers had a harder time finding trucks and paid a premium in most major markets and lanes, according to DAT. Compared to May, the van rate gained 11 cents to $1.80 per mile while the reefer rate was up 10 cents to $2.12 per mile. The flatbed rate was $2.16 per mile, up 6 cents month over month.

Spot truckload rates incorporate a fuel surcharge that is tied to the average price of on-highway diesel, which has fallen 7 cents per gallon since the start of 2017.

“Spot rates have remained strong for all three equipment types even though the surcharge portion has been shrinking compared to previous years,” said Mark Montague, DAT industry pricing analyst.

He added that July typically is a month of transition, when freight activity begins tapering off until the end-of-year holiday season. This year may be an exception, however, as load availability and pricing trends remained strong in the first week of July.

Tank Transport Trader partners with DAT to offer a special on the TruckersEdge load board to its members. Sign up for TruckersEdge today and get your first 30 days free by signing up at www.truckersedge.net/promo752. This offer is available to new TruckersEdge subscribers only.