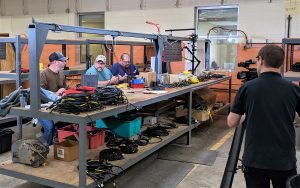 Betts Industries announced that the family-owned company was showcased in an episode of Manufacturing Marvels on the Fox Business Network.

Betts Industries is a leading manufacturer of critical fluid control components and lighting systems for the tank truck industry worldwide. Headquartered in Warren, Pennsylvania, Betts is celebrating its 120th anniversary this year.

Manufacturing Marvels produces and airs educational videos featuring North American companies who supply quality products and services to a number of industries. The two-minute videos highlight manufacturers along with their products, customers and employees.

“We are extremely proud to be featured on Manufacturing Marvels,” said Charles (Chad) Betts, President and CEO. “This program gives us an opportunity to shine the light on our dedicated employees and loyal customers. It is especially fulfilling that we are featured as we celebrate our 120th year in business.”

The Manufacturing Marvels video featuring Betts Industries was debut on Fox Business Network on May 12, 2021

“The entire Betts family and our team is excited about this opportunity to share our company’s history and our ongoing commitment to ‘Do What’s Best’ in every situation,” said Betts.

Betts Industries, Inc. (bettsind.com) designs, engineers, manufactures and supplies critical fluid control components and lighting systems for the tank truck industry. The company offers its products for multiple liquid tank, dry bulk and industrial applications. It serves customers through a network of distributors in the United States and internationally in countries that include Australia, Canada, Chile, China, India, Mexico, Pakistan, South Korea and the United Kingdom. The company was founded in 1901 and is headquartered in Warren, Pennsylvania.