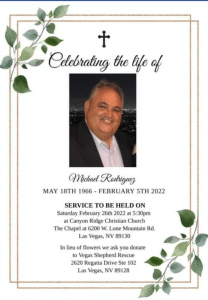 Michael was born on May 18th, 1966 in New York to Josephine and Carlos Rodriguez. He grew up in Dix Hills Long Island where he graduated from Half Hollow Hills High School East. He moved to Las Vegas in 1995 where he met Kim Gonzalez, his wife. Kim and Michael were together 17 years before marrying in 2016. Michael and Kim worked together at Tank Master of Nevada and Silver Canyon Realty.

Those who knew Michael know that he lit up the room when he entered it; everyone who met him was drawn to him, he was a gentle soul with a big personality, fantastic smile, and sense of humor.  In his spare time, he loved being with his family, being Papa to his grandchildren, playing with his dogs and selling real estate.

Michael began his career in the trucking business at C &W Truck and Equipment in Las Vegas in 1998 where he managed the shop which repaired and inspected cargo tanks.  In 2002, he entered his second career, full time, as a realtor in the residential market.  In 2010 Michael returned to the cargo tank industry, joining the startup team at Tank Master of Nevada.  Michael was very instrumental in establishing Tank Master of Nevada.  Through his continued enthusiasm, pride and dedication Tank Master grew to the premier shop it is today.  We are all so saddened by his sudden passing.

His memorial service was held on February 26th, 2022. In his remembrance, his family is requesting donations can be made in his honor to Vegas Shepherd Rescue, https://www.vegasshepherdrescue.com/